Choose – Who will you Serve? 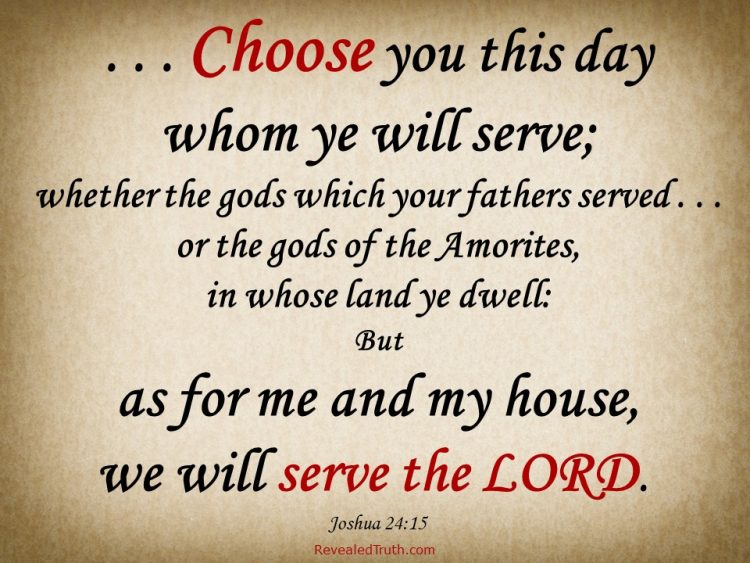 There is a Battle Raging

Which Side Will You Choose?

We all make hundreds of choices everyday.  Many choices are unimportant, but some are critical.  One of the most important decisions we make is what our core beliefs will be based on.  Many people never make this choice.  As a result, they have no basis for making decisions or evaluating what they hear.  They are like boats adrift on the open sea, at the mercy of the winds, waves and currents.  God wants us to become mature, settled, no longer led astray by deceitful men.

Ephesians 4:13-14  says, “. . . until we all reach unity in the faith and in the knowledge of the Son of God and become mature, attaining to the whole measure of the fullness of Christ.  Then we will no longer be infants, tossed back and forth by the waves, and blown here and there by every wind of teaching and by the cunning and craftiness of men in their deceitful scheming.”  (NIV)

There is nothing new about this.  Satan tempted Eve by denying the truth of God’s word and implying that God was holding out on her.  The father of lies told Eve that she would be like God if she would trust him (the devil) rather than God.  Eve believed Satan’s lie, sinned by eating the forbidden fruit, and convinced Adam to sin with her.  The rest is history.  Satan’s tactics have not changed.  He is still tempting people to believe his lies rather than trust in the truth of God’s Word.

Adolf Hitler said, “If you tell a big enough lie and tell it frequently enough, it will be believed.”

In Mein Kampf, Hitler elaborated on this:

“The size of the lie is a definite factor in causing it to be believed, for the vast masses of a nation are in the depths of their hearts more easily deceived than they are consciously and intentionally bad.  The primitive simplicity of their minds renders them a more easy prey to a big lie than a small one, for they themselves often tell little lies, but would be ashamed to tell big lies.”

Hitler also said, “By the skillful and sustained use of propaganda, one can make a people see even heaven as hell or an extremely wretched life as paradise.”

Be not deceived, evolution is one of Satan’s big lies.  Evolution is religion, not science, and the devil has a massive propaganda machine.  He has his priests in the media, the courts, the public schools, and even many church pulpits preaching evolution as a proven fact, repeating the lie frequently enough to be believed by the masses.

1Ki 18:21  And Elijah came unto all the people, and said, How long halt ye between two opinions? if the LORD be God, follow him: but if Baal, then follow him.  And the people answered him not a word.

1Tim. 6:20-21  O Timothy, keep that which is committed to thy trust, avoiding profane and vain babblings, and oppositions of science (or knowledge) falsely so called: Which some professing have erred concerning the faith.

Rom 12:2a  … be not conformed to this world: but be ye transformed by the renewing of your mind, …

I too was once duped by Satan’s Big Lie

Growing up I went to liberal churches where I learned about Jesus, the 10 commandments, and many Bible stories, but I never heard the gospel.  Meanwhile, I was taught evolution in school.  I began to wonder, “If God created the world, where did God come from?”  Having no answers, I became an agnostic; adrift, not knowing what to believe.

Later I learned that Jesus died on the cross as my substitute, to pay for my sin.  I repented of my sin and trusted Christ as my savior.  I learned that God’s Word is truth.  I realized that the Bible and evolution cannot both be true.  Once I knew the Bible to be infallibly true, I knew evolution must be false.  The Truth of God’s Word set me free from the Lies of Evolution.

People today are still struggling with these same issues.  We are constantly bombarded by the media, schools, and even liberal preachers with lies about evolution being a proven fact, but are shown none of the supposed proofs.  They also surpress the evidence that supports the truth of God’s Word.  Under these circumstances, even Christians in fundamental, Bible believing churches can be confused or have doubts.

I once spoke with a young man who was raised in a Christian home and attended a conservative Bible college.  He said he knew the arguments for creation and against evolution, “but where did God come from?  How can He just exist?”  It reminded me of me as an agnostic.

Neither Creation by God Nor Evolution Can Be Proven

This is where faith comes in.  God is all knowing, all powerful, infinite and self-existent.  There is nothing in our finite, physical existence that enables us to understand an infinite God that transcends His creation.  God is beyond our comprehension, so we must believe in Him by faith.  We must accept that God IS, and that He is the first cause of everything else.

Heb. 11:1-3  Now faith is the assurance of things hoped for, the conviction of things not seen.  For by it the people of old received their commendation.  By faith we understand that the universe was created by the word of God, so that what is seen was not made out of things that are visible.

Heb. 11:6  And without faith it is impossible to please Him, for whoever would draw near to God must believe that He exists and that He rewards those who seek Him.  (ESV)

The Word of God is truth (John 17:17), and absolute faith in the truth of God’s Word is required to live a victorious Christian life.  If your beliefs or opinions waver back and forth between believing the Bible and the words of men, then you lack faith.  You have no foundation for decision making and living your life.  He that wavers in his beliefs is unstable.  He will receive nothing from God.  James says:

Jam. 1:5-8  If any of you lack wisdom, let him ask of God, that giveth to all men liberally, and upbraideth not; and it shall be given him.  But let him ask in faith, nothing wavering.  For he that wavereth is like a wave of the sea driven with the wind and tossed.  For let not that man think that he shall receive any thing of the Lord.  A double minded man is unstable in all his ways. (KJV)

We live in a world of uncertainty.  We are told one thing today, but something else the next.  Man’s theories and ideas are always changing.  Faith in the ever-changing words of man is like building a house on sand.  Without a solid foundation, a house is weak and unstable.  The wise man builds his house on a sure foundation.  In this ever-changing world, the only sure foundation is the truth of God’s Word.  (Matt. 7:24-27; Luke 6:46-49)

Since the Bible is the only truth we can be sure of, we must use it to test everything we read or hear.  Acts 17:11 describes the Jews of Berea as “more noble” because they examined the scriptures daily to see if the things Paul preached were so.  Like the Bereans, we should examine the scriptures to test what we are told to see if it agrees with or disagrees with the Bible.  If it agrees, then we can trust it.  If it disagrees, then we know it is false.  If the Bible is silent on that subject, then it may be true or false; we cannot be sure.

Trusting God’s Word is like having a GPS (Global Positioning System) to guide us.  The Bible provides a trustworthy basis for making wise decisions that will please God.  It enables us to steer a straight course on the troubled seas of life and avoid the unseen rocks below the surface.  The Word of God gives us a sure foundation by which we can evaluate the truth of everything we hear.

How long will you waver between two opinions?

The Bible clearly teaches that God created the heaven and earth, the sea and all that is in them in six literal 24-hour days, and that there was no death before Adam sinned.  If you do not believe that, then you do not believe God’s Word, and you call God a liar.  If you do not trust what the Word of God says about creation, how can you trust in the Word made flesh for salvation?

How long will you waver between two opinions?  If God’s Word is true, then believe it!  If it seems better to you to believe in evolution, then do so.  But do not pretend to believe in God.  Creation by God and the theory of evolution are mutually exclusive.  So choose this day what you will believe, the ever-changing words of men or the never-changing Word of God.  As for me, I will believe the Bible.  How about you?

Choose this day what you will believe:

The Word of God or Satan’s Lies