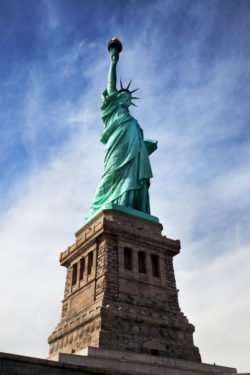 Should You Love America?

How patriotic should we be?

I once read a post, titled “Confused,” written by a woman who said she considers herself a “patriotic Christian.”  She believed in “the love of God and Country” and is “proud of our military.”  A friend questioned her about this since “Jesus is about love and the military is about war.”  This left her confused and in search of answers.  She wondered, “Is the love of God & Country going away?”  That got me thinking.  What should be our reply?

“Is the love of God & Country going away?”

While the Bible says we should obey those who rule over us (Heb. 13:17), it never commands us to love our country, government, or military.  While there may not be anything inherently wrong with being patriotic, it is not necessarily spiritual either.  And what should our feelings be toward the military?

I served aboard a ballistic missile submarine in the Navy during “the cold war.”  Our sub carried 16 Poseidon missiles, each loaded with 10 nuclear warheads. We always said our mission was to be a deterrent to aggression and if we ever had to launch, our mission would have failed.  Praise God it was never necessary.

Our mission was successful.  But what if it hadn’t been?  160 nuclear warheads, all more powerful than the Hiroshima and Nagasaki bombs, would have rained down from the sky.  Is that really something to be “proud” of?

I think we should support our troops, and honor their willingness to serve and potentially lay down their lives for our freedom.  There is more to the military than just the soldiers, though.  Our government sometimes uses them to do more than just protect our freedom.  The fact that we even need a military is a reminder that we live in a fallen world.  As long as our military is protecting our freedoms and serving justice, I will be thankful for our military.  I fear that may not always be the case.

The first pilgrims to America were Christians seeking religious freedom.  Our founding fathers gave us a constitution, the Bill of Rights, and a 3-part government with checks and balances designed to limit governmental power.  For most of our history, America was a predominately Christian nation.  Creation was taught in schools rather than evolution, and the Bible was used as a primer to teach reading.

But that has been changing for decades.  During a speech in 2007, before he was even elected president, Barack Obama declared that “America is no longer a Christian nation.”  And he used the executive power of his presidency to steal away our constitutional rights and limit the influence of Christianity in America.

Our government and unjust judges are reinterpreting our 1st amendment right to freedom of religion to make it freedom from religion.  Freedom of speech is being replaced with political correctness and hate crime laws.  Our military and government are constantly stockpiling more and better weapons, while trying to take away our 2nd amendment right to bear arms.  And the laws passed to protect us from terrorists are being used to legalize spying on American citizens in our homeland.

I am extremely grateful for the peace, prosperity, and freedom I have enjoyed throughout my lifetime as an American.  I feel we have been truly blessed.  But I fear for the future of our country and for our children’s children.

Our nation has changed radically

Our nation has changed radically in my lifetime.  Marriage and the family are under attack.  We have banned Bibles and prayer from schools.  We have banned the 10–Commandments, crosses, and nativity scenes from public places. We teach children that they are just cosmic accidents, highly evolved animals that have no purpose.  Immorality, sex, and self-indulgence have become idols that are practically worshiped. And we have murdered millions of innocent babies.  Should we love a nation like this?

Righteousness exalts a nation, but sin is a reproach to any people (Prov. 14:34)

Bible believing Christians are still some of the most patriotic people in America.  It may have made sense for Christians to love their country in “the good old days,” when America was a predominantly Christian nation, believed in Christian morality, promoted liberty and protected our constitutional freedoms.  But that is not the nation we live in today.

America has become hostile toward Biblical Christianity, actively promotes sin, and is passing laws contrary to Biblical principles.  Bible believing Christians are increasingly being ridiculed and marginalized.  America is no longer a friend of God’s grace.  We may soon have to choose between obeying man and obeying God.  Our first love and primary loyalty belongs to God.

Friendship with the world is enmity with God (Jam. 4:4).

We should be grateful for the freedom, peace, and prosperity we have enjoyed in America (1 Th. 5:18).  But this increasingly sinful nation, with its increasing hostility toward Christianity, does not deserve our love.

When I was young, I was extremely patriotic.  I loved America and was proud of my country.  I am sorry to say that is no longer true.  I am still thankful to be an American, but I am ashamed of what we have become.  And I fear what our government and military may do someday.  I am afraid the time for loving our country may have passed away.