Should You Answer a Fool? 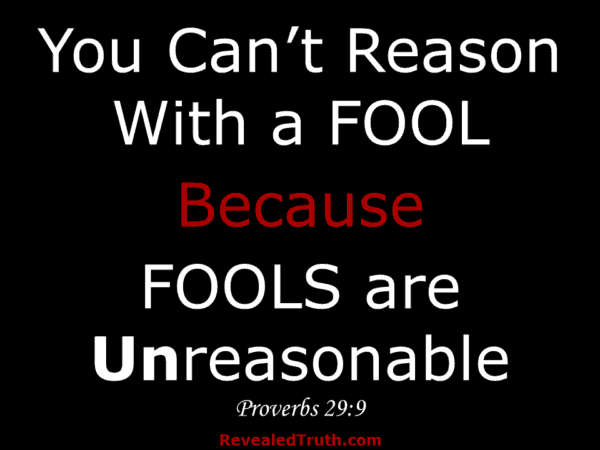 Should you Answer a Fool According to his Folly, or Not?

Many people who don’t know or understand God’s Word claim the Bible is full of contradictions (even though they can’t name any). One seeming contradiction is this pair of verses from the book of Proverbs:
•   “Answer not a fool according to his folly, lest you be like him yourself.” (Proverbs 26:4 / ESV)
•   “Answer a fool according to his folly, lest he be wise in his own eyes.” (Proverbs 26:5 / ESV)

If these verses were widely separated in different parts of the Bible, then the apparent contradiction might be hard to explain. But these verses occur together, one right after the other, so they are meant to be taken together.  We must dig a little deeper to get to the meaning.

In Bible study, it is often necessary to compare a scripture with scriptures from other parts of the Bible.

To make sense of these two Proverbs, it is helpful to add a third:
•   “If a wise man has an argument with a fool, the fool only rages and laughs, and there is no quiet.” (Proverbs 29:9 / ESV)

Taken together, these three verses teach the following lessons:

You cannot reason with a fool, because fools are unreasonable. The fool will either mock or get angry at the reasoning of the wise. Either way, there will be no peaceful resolution of the disagreement. But that does not mean you should leave a fool unanswered, because then they will smugly think they are right.

Since a fool cannot be reasoned with, you cannot win an argument with one. If you try, you are likely to appear foolish yourself as the fool drags you down to his level, trying to answer his erroneous arguments.

You do not know just how foolish someone is

Does this mean we should always follow the advice of Proverbs 26:4 by not answering the fool? The answer depends.

If the dispute is about something unimportant or unprovable, the wisest course may be to let the ignorant remain ignorant and avoid the quarrel. As the apostle Paul told Timothy, “Avoid foolish and ignorant disputes, knowing that they generate strife” (2 Timothy 2:23 / NKJV).

In important matters, it may be best to reason with the fool in hopes of bringing them to the truth

In important matters, it may be best to reason with the fool in hopes of bringing them to the truth. This is particularly true of the gospel. We have been commanded to “preach the gospel to every creature” (Mark 16:15). No exception was made for fools.

And a servant of the Lord must not quarrel but be gentle to all, able to teach, patient, in humility correcting those who are in opposition, if God perhaps will grant them repentance, so that they may know the truth, and that they may come to their senses and escape the snare of the devil, having been taken captive by him to do his will.  (2 Timothy 2:24-26 / NKJV)

We should try to reason with the fool and lead them to the truth, “lest they be wise in their own eyes.” And you do not know just how foolish someone is. If they are merely ignorant or deluded, you may be able to reason with them.

We must always be ready to gently answer anyone who asks the reason for the hope we have in God through our Lord Jesus Christ. (1 Peter 3:15)

Do you Have to be Baptized to Go to Heaven?

Do you Have to be Baptized to Go to Heaven?
Load More