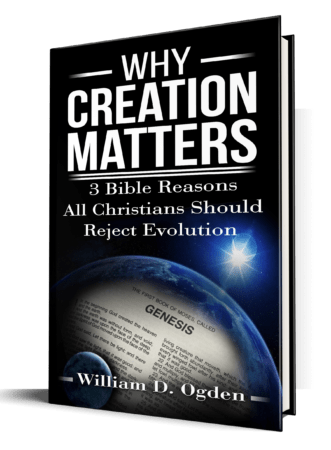 All Christians Should Reject Evolution

(Available on Amazon.com as a Kindle book and as a paperback)

Many people question why believing in creation is important.  Perhaps you are one of them, or know someone else who is.  Many Christians are intimidated by the world’s insistence that evolution is true, and don’t want to appear foolish.  They ask why believing in evolution matters as long as they have trusted in Jesus Christ as their savior.

This book is an in-depth Bible study on why Creation matters. It presents 3-Biblical reasons why all Christians should believe in a recent 6-day creation as revealed in Genesis.  The Bible clearly teaches that an all-powerful, pre-existent God created the heavens and the earth, the sea and all life in six literal 24-hour days.  This truth is the foundation upon which all other Christian doctrines rest, including the doctrine of salvation.

The world is becoming increasingly hostile toward the doctrine of creation.  Many seemingly authoritative scientists have declared that evolution is a proven fact, even though they provide no proof and ignore contradictory evidence.  The media magnifies this message of unbelief, and our schools have become temples dedicated to evolutionary faith.  Meanwhile, peer pressure pushes people to conform to the corrupt convictions of the crowd.

Contrary to common belief, evolutionary theory is not based on scientific proof.  Instead, evolutionists are willing ignorant (2 Peter 3:5) of God’s power and ingenious design, which are clearly seen in the natural world all around them (Romans 1:19-20).  Evolution is the improbable explanation for existence by those who claim to be wise, while demonstrating their foolishness by rejecting the truth of God (Romans 1:21–22).

The primary purpose of this book is to encourage Christians to remain faithful to God’s Word, because many have strayed from the faith after trusting the false science of evolution (1 Timothy 6:20-21).  Those who stop trusting the Word of God when it speaks of creation are likely to stop trusting Bible teachings on other topics as well.  And those who join the ungodly in suppressing the truth will experience God’s wrath (Romans 1:18).

There are many good books, articles, and videos by Creation scientists showing that genuine science supports the message of creation (including my book: “Evolution – The Fairy Tale of Science”).  The global flood in the days of Noah explains the earth’s geology and the fossil record better than evolutionary theories.  The purpose of this book is not to add to those scientific resources.  Instead, it examines the importance of creation from a Biblical perspective throughout the Bible, from Genesis to Revelation.

The 3-Reasons Creation Matters are:

The book also includes an addendum of verses located throughout the Bible referencing creation, from Genesis to Revelation.

If you are interested in learning more, I invite you to download the Kindle book or order the paperback from Amazon.com.