Will You Stand in the Gap before God? Two of the saddest verses in the Bible are found in Ezekiel 22:30-31

God takes no pleasure in the death of the wicked or in punishing people. He desires repentance so He can show mercy (Ezekiel 18:32; 33:11). In the days of Ezekiel, God was using Babylon to destroy Jerusalem for the their rebelliousness and wickedness. But He wanted to show mercy. He told Ezekiel that He looked for someone to stand in the gap before Him to intercede for His people and His city so He could spare them. God is still looking for righteous people who will stand before Him interceding on behalf of sinners so He can show mercy. Will you answer His call?

“And I sought for a man among them, that should make up the hedge, and stand in the gap before Me for the land, that I should not destroy it: but I found none.” Ezekiel 22:30

“Therefore have I poured out Mine indignation upon them; I have consumed them with the fire of My wrath: their own way have I recompensed upon their heads, saith the Lord GOD.” Ezekiel 22:31

This passage presents God’s inner turmoil. His holiness and justice often demands punishment, but His love wants to show mercy. Probably the most famous verse showing this conflict is John 3:16.

God is “not willing that any should perish, but that all should come to repentance” (2 Peter 3:9). So God demonstrated His love for the world by becoming a man, conceived by the Holy Spirit and born of a virgin, to live a perfect life and give His life on the cross to pay the death penalty for our sins. “That whosoever believeth in Him should not perish, but have everlasting life” (John 3:16).

God not only cares for us individually, He also cares for people as groups and nations. When we die, each of us will stand before God to be judged individually. God also judges communities and nations for their wickedness. 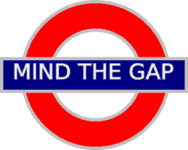 The love of God seeks for reasons to show mercy.

So God seeks people who will stand in the gap before Him to intercede on behalf of those who deserve judgment.

There are many examples in the Bible of righteous men interceding before God on behalf of those deserving judgment.

Abraham Stood in the Gap Interceding for Sodom

God informed Abraham of His plan to destroy Sodom and Gomorrah for their sin. Abraham got God to agree to spare them if just ten righteous people could be found there. But not even 10 righteous could be found so only Lot and his daughters were spared. Genesis 18:22-33

Moses Stood in the Gap before God, Interceding for Israel

Israel sinned by worshiping a calf and committing immorality with the daughters of Moab, while Moses was on the mountain receiving the Ten Commandments.  God informed Moses of their sin, saying He would destroy the children of Israel and start over with him. But Moses interceded on behalf of his nation so God agreed to spare them. Exodus 32:7-14

Jonah did Not Want to Stand in the Gap for Nineveh

Jonah knew that God is gracious, merciful, of great kindness and relents for evil intent (Jonah 4:2). Jonah tried to run away so Nineveh would judged rather than spared. But God used a great storm and a whale to send Jonah to Nineveh anyway. As Jonah feared, when he proclaimed God’s coming judgment, the people of Nineveh repented and God spared them.

In the days of Ezekiel, God’s chosen people had been worshiping idols, burning babies in fires to pagan gods, and violating His law. The northern kingdom had already been destroyed and taken into exile by the Assyrians for their sin. Now God was using the Chaldeans to judge the kingdom of Judah for their wickedness.

In Ezekiel 22:30-31, God lamented that He had wanted to show Israel mercy, but He could not find anyone to intercede before Him on their behalf.

So now He would have to destroy them. 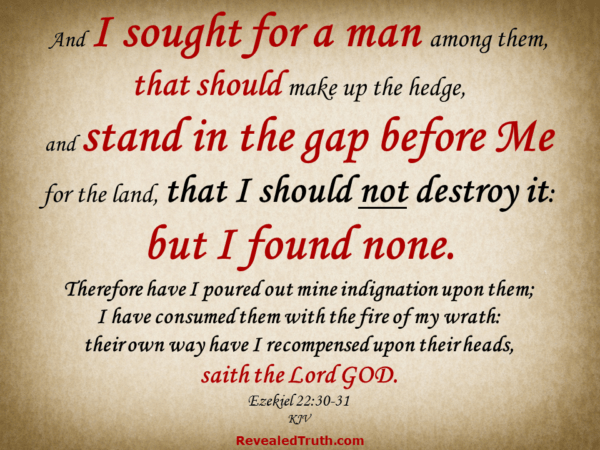 Today, America is guilty of the same sins that led to the destruction of Israel.

People are rejecting God as their Creator and worship the gods of “Time, Chance and Evolution” instead. Immoral sex of all types is exalted, while marriage is redefined and gender distinctions are vilified. Thousands of babies are murdered every day in the name of “choice,” while government funded “chop shops” profit by selling human body parts.

God’s patience must be growing thin. The blood of millions of aborted babies calls out to Him, crying for vengeance. God’s justice demands wrath in return for our wicked ways.

Yet our Loving God wants to Show Mercy

God is looking for righteous intercessors who will stand in the gap before Him, asking our Heavenly Father to remember the blood His Son shed for all. And pleading for the grace and revival we need rather than the judgment we deserve.

Will you stand in the gap and build up the wall?

Will you be an intercessor for all?