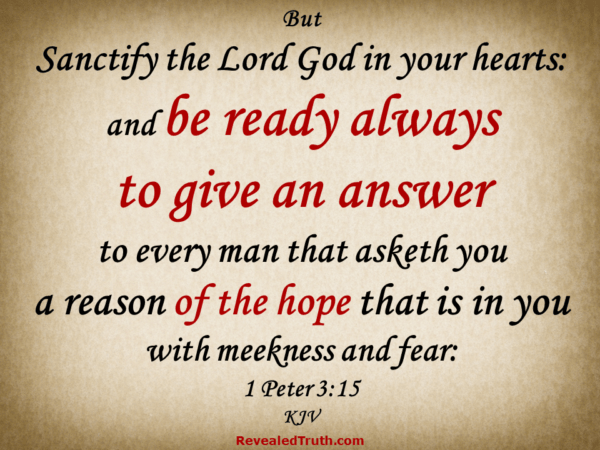 The apostle Peter told us to always be ready to answer anyone who asks us the reason for our Christian hope (1 Pet 3:15).

These days, that often means being ready to answer Evolutionists as to the reason for our belief in Biblical Creation.

On June 5th, 2016, I saw a snarky meme by Chuck Easttom that Wilbert Lek posted on the “”Quotes” Against Evolution” Facebook group page:

This got me wondering how many Bible believing Christians would be ready to answer this criticism.  Far too often it seems that Christians are willing to compromise their Biblical beliefs rather than trust God’s Word and answer their critics.

So in the spirit of 1 Peter 3:15, here is my answer to these critics of young earth creationism, Wilbert and Chuck:

1. Just because a majority of people believe something, does not make it true.  When most people thought the world was flat, the prophet Isaiah described the earth as being circular (Isa 40:22) and Job said God “hangeth the earth upon nothing” (Job 26:7).  Aristotle taught that the rate at which objects fell was related to their mass, and most people agreed with him, until Isaac Newton published his laws of motion and universal gravitation.  Most people used to believe in spontaneous generation until Louis Pasteur proved otherwise with his famous experiments in 1862.

2. The source of the statistics is not given, so there is no way to verify their reliability or accuracy.  None of these statements is backed up by proof.

3. Scientists who admit to believing in creation are often subject to ridicule, public censor, discrimination, and even job loss.  There may be many scientists  who believe in creation, but are unwilling to admit it out of fear.  This would render the statistics inaccurate.

4. The teaching of creation or intelligent design as an alternative explanation for the origin of the universe and life has been banned from public education classrooms for decades.  Evolution has been presented as a proven fact.  Students are not given both theories and the evidence, and taught to discriminate.  As a result, several generations have been brainwashed from childhood to believe in evolution.  This one sided indoctrination into evolution could explain why most scientists believe it.  That does not make it true.

5. Evolution is not science.  Genuine science involves observing things in the present, making theories of how things work, testing those theories, and having other people repeat those tests to verify the results.  The origin of the universe and life happened in the past.  It cannot be observed today; nor can it be tested or repeated.

6. “Matter and energy cannot be created or destroyed,” there is therefore no natural explanation for how the matter and energy of the universe could come into being that obeys the physical laws of the universe that can be observed in the present.  Even if a “Big Bang” happened, it still would have been a miracle that violated the laws of nature as we know them today.

7. Evolutionists have no credible theory of how life could could form from inanimate matter.  Even the “simplest” cell is extraordinarily complex.  Multiple working proteins performing cellular work (including making proteins and copying DNA), an energy source, a way to reproduce, and DNA to code for it all would all have to be present and working at the same time.  This irreducible complexity could not happen by chance.  And nothing has ever been observed that indicates that it could happen.  Belief that this could happen is not science; it is a religious faith.

8. Evolutionists have no credible theory for how stars could form following observable natural processes.  They claim that gas clouds collapse into stars through gravitational force, but gases naturally expand.  The repulsive force of gas molecules would prevent enough mass from getting close enough together for the force of gravity to exceed the gas expansion force by natural means.

9. Evolutionists believe that all life evolved upward from a common ancestor through mutations and natural selection despite the fact that the vast majority of mutations are harmful and no transitional forms have been found in the fossil record to corroborate their belief.  This is not science; it is a religious faith.

10. Israel had its share of shepherds, but most of the authors of the Bible were not uneducated.  Moses, the human author of Genesis and the other 4 books of the Pentateuch, was raised as the son of an Egyptian Pharoah’s daughter for 40-years.  He would have received the best education available at that time.

Moses was learned in all the wisdom of the Egyptians, and was mighty in words and in deeds (Acts 7:22)

And people did not write the Bible on their own.  The God who created the universe and all life wrote the Bible using Godly men.  “For the prophecy came not in old time by the will of man: but holy men of God spake as they were moved by the Holy Ghost” (2 Peter 1:21).  So no, uneducated goat herders did not get it exactly right.  The God who created everything got it exactly right and recorded it in His Word, the Bible.

11. For what if some did not believe? shall their unbelief make the faith of God without effect?  God forbid: yea, let God be true, but every man a liar” (Romans 3:3-4a).

It’s my hope and prayer that this will help Christians prepare to answer Evolutionists who ask the reason for the hope within them.  How about you?

Are you ready to give an answer for the reason of the hope within you?

Be Ready to Give an Answer for Your Faith