The Ark Has Landed in Williamstown, KY

Answers in Genesis has launched their Ark Encounter ministry!

On Tuesday, July 5th, I had the privilege to attend the official ribbon cutting ceremony for the Answers-In-Genesis Ark Encounter along with my oldest son, my sister, and 8,300 other people.  On Wednesday I went back with my wife, my son, and his wife (and about 7,000 people).  We were all amazed by how big, impressive, and Biblical it is.  We praise God for raising up this God honoring, evangelistic Christian ministry! 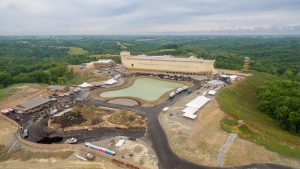 The Ark Encounter site provides other activities in addition to touring the many exhibits in the 3-floors of the massive ark.  Other amenities currently available include: 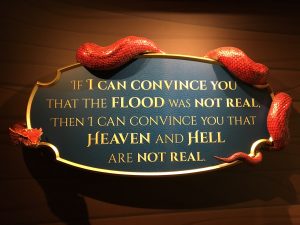 Why Build an Ark?

This plaque located by the entrance to the Fairy Tale Ark room sums it up pretty well.  Satan doesn’t want people to believe the Bible.  Our enemy wants people to believe that life and the universe came about by chance, and that all things have continued as they are since the beginning.

“Knowing this first, that there shall come in the last days scoffers, . . . saying, . . . all things continue as they were from the beginning of the creation.  For this they willingly are ignorant of, that by the word of God the heavens were of old, and the earth standing out of the water and in the water:  Whereby the world that then was, being overflowed with water, perished.”

We are in a spiritual battle.  The devil doesn’t want people to believe in a global flood that destroyed the earth in the days of Noah.

Answers-in-Genesis has taken up the fight for Biblical truth by building the Ark Encounter.  The purpose of this Ark is to demonstrate that Noah could build a sea-worthy ship that could have preserved two of each “kind” of air breathing land animal during a global flood.  The Ark Encounter is a marvelous testimony to this Biblical truth!

The Truth About Ark Construction Money

There has been a flood of controversy regarding the Ark Encounter being included in a Kentucky tax rebate program.  It has been reported that tax money was used in the construction of the Ark.  But that is completely false.

The truth is that the construction of the Ark Encounter was 100% paid for by believers who actively support this ministry and voluntarily gave their money to it.  Over $33,000,000 came from donations.  The rest was collected through a bond offering.  Zero came from tax money.

The Kentucky tax rebate program applies to qualifying entities that can attract large numbers of tourists into the state.  To receive any rebate money, the Ark Encounter will have to succeed well enough to meet certain minimum revenue targets.  If (and only if) they meet these financial requirements, they will receive a percentage of the sales taxes that were collected at the Ark Encounter as a rebate.

It should go without saying that no sales tax money would have been collected at the Ark Encounter had it not been built.  And in addition to the tax revenue the state will receive through sales at the Ark Encounter, there will be an increase in tax revenue from surrounding businesses such as restaurants, hotels, gas stations, etc.

In addition to increasing the amount of tax revenue to the state through these sales, extra jobs will be created both at the Ark Encounter and at surrounding businesses.  These benefits to the people of Kentucky are the reason for the existence of this program.

To allow this rebate for casinos, race tracks, and other secular for-profit businesses while denying participation to the Ark Encounter on the basis of its being a Christian ministry would be religious discrimination.  And discrimination on the basis of religion is, of course, a violation of the Constitution and Federal law.

About the Ark Encounter

Radiocarbon in Dinosaur Fossils Proves they are Young

Radiocarbon in Dinosaur Fossils Proves they are Young
Load More