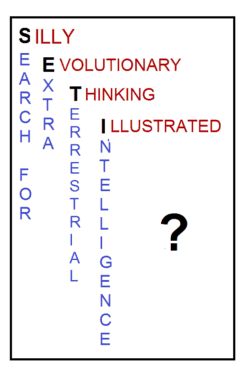 
The Search for Extra-Terrestrial Intelligence (SETI)

SETI “is the collective name for a number of activities people undertake to search for intelligent extraterrestrial life. SETI projects use scientific methods to search for electromagnetic transmissions from civilizations on distant planets.” (Wikipedia)

SETI is based on an evolutionary worldview:

The thinking goes like this:  Non-random electromagnetic (light or radio) signals do not occur naturally.  Non-random (ordered) signals can only be produced by intelligent beings because order only comes from intelligent design.  Detecting ordered patterns in any light or radio signals would therefore prove that intelligent life exists elsewhere in the universe.

The acronym, SETI, should mean:

Why?  Because the people who are searching the universe for non-random radio waves to prove the existence of extra-terrestrial intelligence can clearly see the immense amount of ordered information packed into DNA.  But they claim DNA just happened by chance with no intelligence involved.  This is inconsistent and makes no sense!

Rom 1:20  For since the creation of the world His invisible attributes, His eternal power and divine nature, have been clearly seen, being understood through what has been made, so that they are without excuse.

Rom 1:21  For even though they knew God, they did not honor Him as God or give thanks, but they became futile in their speculations, and their foolish heart was darkened.