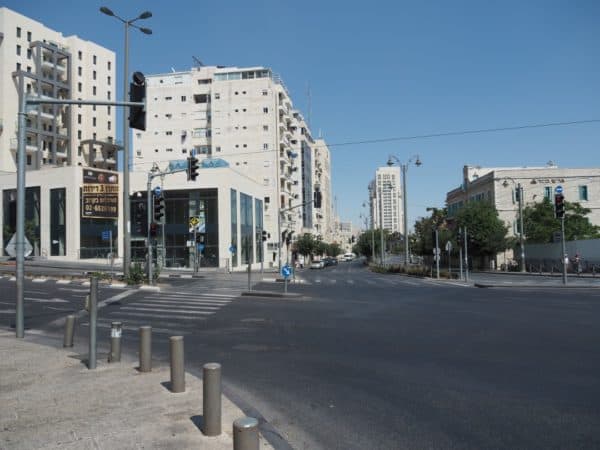 The English word, “Sabbath” is based on the Hebrew word, “Shabbat” (שבת).  In Hebrew, Shabbat is used both as a verb and a noun.  The noun form is similar in meaning to the sabbath as a day or period as rest.  The verb form is used as a common word with several meanings.  It means “to cease” or “desist” (from an activity or work), and so “to rest.”

Interestingly, related words from the same Hebrew root include “seven” and “to swear an oath” (to bind oneself).  The Jewish Shabbat (Sabbath) was instituted by the Mosaic Covenant with which the Children of Israel bound themselves to cease from work on the seventh day each week for a day of rest and worship.

Traveling to Jerusalem on the Sabbath

Now that we have examined the meaning of Shabbat in Judaism, we will resume the story of my first full day in Israel, which happened to be on a Sabbath. 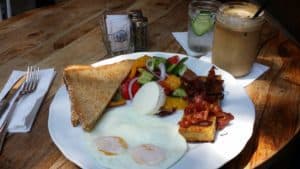 I woke up feeling refreshed after 10 hours of sleep during Israel’s night and day of rest.  At 10:30 I went across the street for an excellent brunch at Nona’s restaurant, which included eggs, toast, vegetables, hash browns, and bacon.  They had many other options, including tofu and salmon, but I chose the meat I like.

Was it wrong for me to eat bacon in Israel? I was surprised to see bacon on the menu, but it they were willing to serve it, I was willing to eat it. (I did not see or eat any pork for the rest of my trip though.)

After finishing my marvelous meal, it was time to find my way to Jerusalem.  When I checked out, I asked the hotel clerk the best way to get to Jerusalem since the buses and trains were not running.  He informed me that even though the government buses do not run on the Sabbath, the private buses do.

He told me I could take the number 5 bus to the Tel Aviv station for 8 shekels, and get a bus to Jerusalem from there for 45 shekels.  This boosted my hopes considerably.  There was a number 8 bus stop on the other side of the street from the hotel, so I crossed over and waited.

When the next one passed without stopping, he explained that these buses only hold 10 passengers.  Once they are full, they only stop for traffic signals and to let people off.  Not even “hutzpah” can get a full bus to stop. He suggested taking a taxi to the bus station, but I decided to keep trying.

Finally, a bus with only 7 passengers stopped for me and took me to the “station,” which was just a public street crowded with their buses. Once there, I paid my 45 shekels and wedged in-between three other people on the back seat of the next Sherut to Jerusalem. Now that I was on my way to Jerusalem for only 53 shekels (about $15), I felt much better about my decision to spend my first night in Tel Aviv.

Our tour leaders said our Jerusalem Gold hotel was near the central bus station, so I rode the Sherut to the end of its route in Jerusalem, which was too far because this was not on a government bus going to their central station.  When I asked how to get to my hotel, they pointed up hill in the direction from which we came, and said I would need to take a taxi because it was too far.

I had several hours before I needed to join my tour group though. Since I had plenty of time, I decided to walk. Soon after leaving the bus on my uphill trek, I noticed something strange. The city streets were empty! There was no traffic to dodge. The streets were deserted; I had them all to myself.

Occasionally, I saw Hasidic Jews walking to or from Synagogue.  The men wore long black coats and black hats (which looked very hot).  I wondered what they thought of this American in blue jeans carrying a backpack and dragging a suitcase up the streets of Jerusalem on their day of rest, when all work was supposed to cease.

When I got to a large intersection where the road shifted, I thought I should get directions again. I asked the only people in view, who turned out to be an American couple on vacation.  Unlike me, they had activated their cell phones for international service, so the man simply pulled out his cell phone and checked it for walking directions.

It turns out that Google Maps works in Israel just as well as in America. He showed me the directions and I continued my uphill journey. 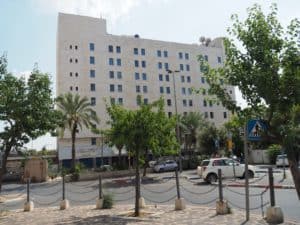 As I walked, I sought out patches of shade to hide from the hot Israeli sun.  I was surprised as I passed a couple sitting on a bench in the shade, when the man asked if I was with Biblical Byways. What gave me away, my American clothes, my backpack and suitcase, or my walking the deserted streets at all? I suspect it was all of the above.

Dennis and Esther invited me to join them and we started getting acquainted. So ended my solitary wandering in Israel. Dennis led me to our hotel where we met a jet lagged group of exhausted travelers waiting to check in. It was time for this introvert to be social.

Comparing the Sabbath in Tel Aviv with the Shabbat in Jerusalem is like night and day. I am sure there was less activity in Tel Aviv on Saturday than other days, but it seemed pretty normal to me. The restaurants were full; there was a steady stream of cars, sheruts, taxis, and bicycles on the streets; and the people were dressed normally. I did not feel out of place at all. If I did not know the shops were closed and the government transportation shutdown, I would have thought it much like a typical Saturday morning in America. 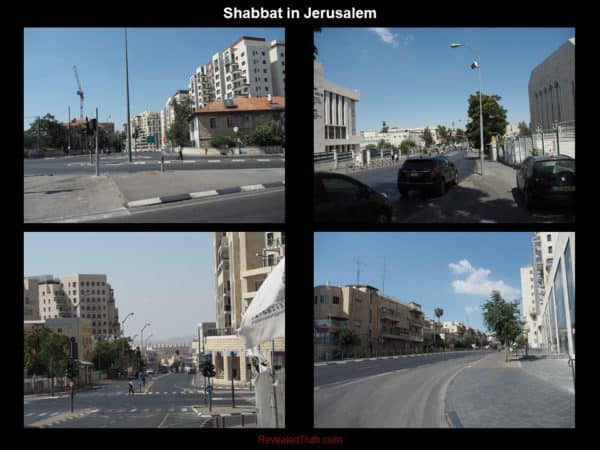 Jerusalem, on the other hand, was like a ghost town. Everything was closed, restaurants and gates as well as shops. With the exception of rare intruders (like me) or the occasional uniquely-dressed Hasidic Jew, the empty streets of this historic city felt desolate, being devoid of people and activity. I had never seen or experienced anything like it before. I marvel at how hard these faithful Jews are willing to work at keeping their covenant to rest on their Shabbat.

My next post will describe the first day of our Bible study tour in southern Israel, which began the next day.

Initial Impressions of Israel – The Sabbath in Tel Aviv