Temptation on the Cross 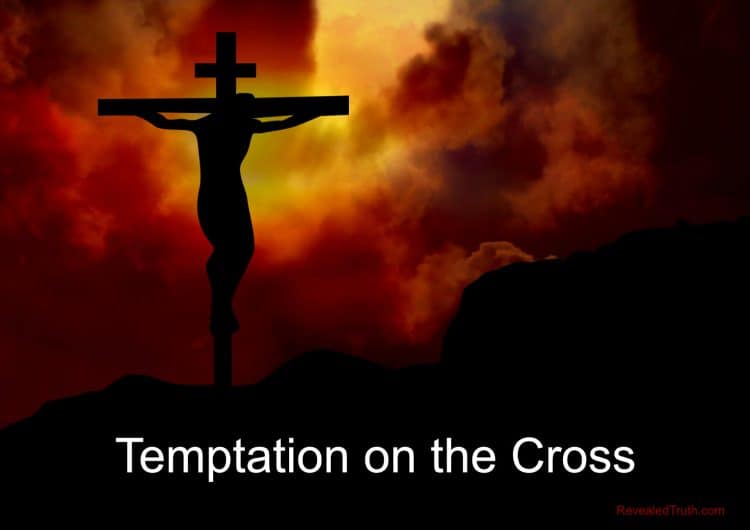 In his first epistle, the Apostle Peter gave us this warning:

“Be sober, be vigilant; because your adversary the devil, as a roaring lion, walketh about, seeking whom he may devour” (1 Pet. 5:8)

Immediately after Jesus was baptized, the Holy Spirit led Him into the wilderness where He was tempted by the devil (Lk. 4:1-2).  The Bible records three temptations that occurred after Jesus had been fasting 40-days.  Two of those temptations began with the taunt, “If You are the Son of God,” followed by a temptation to do something contrary to the will of God (Lk. 4:3-12).

Jesus defeated the devil through these trials by quoting the Word of God.  Luke then records, “And when the devil had ended every temptation, he departed from Him until an opportune time” (Lk. 4:13 – ESV).  It is likely that Satan tempted Jesus many more times throughout His 3-year ministry, but what could be a more opportune time than the crucifixion?

Jesus defeated the devil through these trials by quoting the Word of God.

Jesus had already sweat blood, asking His Father to take the cup from Him if possible.  He had been betrayed by one of His disciples, denied three times by another, and deserted by the rest.  He was arrested, falsely accused in an illegal trial, beaten, mocked, and brutally whipped.

Then they stripped Him naked, nailed Him to a cross, and crucified Him between two criminals.  But Jesus remained steadfast, faithfully obeying His Father’s will.

The devil’s last attempt at tempting Jesus echoed back to the wilderness trials.  You can almost hear Satan whispering through the pages of scripture, “If you are the Son of God, save Yourself.”

The spectators and Jewish leaders, the Roman soldiers, and even the thieves being crucified with Him, all tempted Jesus to save Himself.

And the people stood looking on. But even the rulers with them sneered, saying, “He saved others; let Him save Himself if He is the Christ, the chosen of God.”

The soldiers also mocked Him, coming and offering Him sour wine, and saying, “If You are the King of the Jews, save Yourself.”

Jesus proved He Is the Son of God by staying on the cross, and dying to pay for our sin.

He came as a savior, not as a king

He came as a servant, salvation to bring

Down from the cross, He could have fled

But He chose to stay, and save us instead!

Why Did God Forsake Jesus?

Previous Post Opening the Eyes of the Blind Next Post Joy on the Cross
Revealed Truth uses cookies to optimize your experience on our site and enable Google Analytics. Continued use of this site indicates acceptance.OKPrivacy policy