Daniel Gave Thanks – What Would You Do?

Daniel 6:1-13 tells of a time when wicked men, jealous of Daniel’s advancement, sought a false pretext against Daniel to discredit him so he would be removed from his position of power. They knew he was too diligent, honest, and faithful to find any real fault. So, they convinced the king to make it illegal to pray throughout his empire except to the king himself.

This appealed to the king’s vanity, so he made the law without really thinking through the consequences. When Daniel learned that praying to God was now illegal and carried a death penalty, Daniel continued to openly pray 3-times a day anyway.

The following is a Thanksgiving prayer based on Daniel’s faithfulness:

Imagine a world where it is illegal to pray,

And if you are caught, you will Die that day.

What would you do?

Would Man you obey?

Perhaps you would choose to run away.

Or would you stay, and hide to pray?

And if you did, what would God say?

The penalty of death, he was willing to pay.

So, give thanks to God for freedom today!

It may not always be this way,

So, determine now, God’s Will to obey. 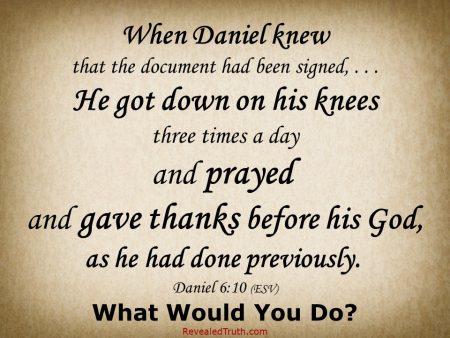