Be Specific When You Pray 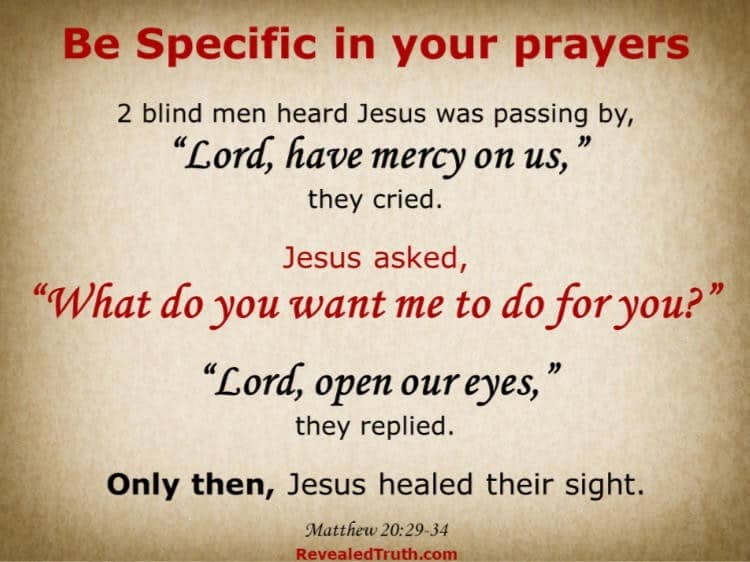 Be Specific in Prayer

If you want your prayers answered, you must be specific in your request. Be clear about what you are asking for. The need to be precise in your prayer requests is clearly illustrated in the story of the two blind men in Matthew 20:30-34.

Vague Prayers Are Not Enough

And Jesus stood still, and called them, and said, “What will ye that I shall do unto you?”

They say unto Him, Lord, that our eyes may be opened. So Jesus had compassion on them, and touched their eyes: and immediately their eyes received sight, and they followed Him.  Matt 20:29-34

Mark 10:46-52 and Luke 18:35-43 also relate this story with some different details.  Mark and Luke only refer to one blind man and indicate he was begging. Mark gives us his name, Bartimaeus. All three accounts convey the need to be specific when making our requests known to God.

Persistence Was Not Enough

Faith Was Not Enough

They believed Jesus could heal them and acknowledged His authority.  They called Him, “Lord,” and referred to Him as “the son of David.”  But they remained blind.

Jesus stopped to speak with them and asked them what exactly they wanted, saying, “What do you want me to do for you?”

Jesus did not answer their prayer until they told Him specifically that they wanted to receive their sight. Then Jesus had compassion and immediately answered their request by healing their eyesight.

Most people present that day knew what these blind men needed most from the miraculous healer they were following. But “Have mercy on us” is probably how these two blind men begged of all who passed by. Jesus wanted them to make it clear that they were asking for miraculous healing rather than money.

If we want our prayers answered, we must be specific when we pray.

Do you Have to be Baptized to Go to Heaven?

Do you Have to be Baptized to Go to Heaven?
Load More