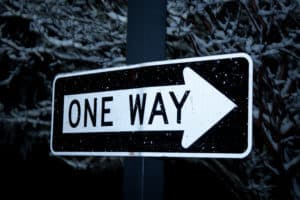 The Only Way to Heaven

Most people want to go to heaven. Does that include you?

After all, who would want to go to hell, a fiery place of eternal torment? Some atheists comfort themselves with the thought that the material universe is all there is and when their body dies, they will simply cease to exist. But most people are not comforted by the idea of non-existence.

People want to live, not die. Deep down people know there is more to life than just this physical existence. So they are afraid to die. And they should be, because: “it is appointed for men to die once and after this comes judgment” (Heb. 9:27 / NASB).

So people want an easy way to heaven. Many would like many paths to choose from. They would like heaven to be a sure thing regardless of how they live or what religion they may follow.

People would like to think that anyone who sincerely seeks God by practicing any religion, or who lives a “good” life will make it to heaven. People want an extremely permissive god who accepts people on their own terms; not a Holy God who judges people based on His standards.

They “imagine” that “the world could live as one” if only there were no god or heaven or religion.  But that false dream would be a nightmare!

Many see religion as a cause of division and strife between people.  They point to all the wars and killing that has been done in the name of religion.  They “imagine” that “the world could live as one” if only there were no god or heaven or religion.  But that false dream would be a nightmare!

The problem is not with God or heaven.  The problem is with the sin nature of people that leads them to rebel against their Creator and fight with each other (even in the name of religions that teach love as a highest good).

Ultimately, it does not matter what people want or what they would like to think. What matters is the truth. If there is a God in heaven who created the world and all life (as taught in the Bible), then He gets to make the rules. He has the right to judge us by His standards. We must all obey His will, or suffer the consequences of disobedience.

Jesus is the Only Way to Heaven

Many people would like Christianity to just be one of many ways to heaven, but that is not what the Bible teaches.  Either Jesus is the only way to heaven, or Christianity is not a way at all.  Let’s examine the Scriptures to find the truth God has revealed.

Either Jesus is the only way to heaven, or Christianity is not a way at all

Christ’s declaration leaves no room for Christianity to just be one of many ways to God.  Jesus was God in the flesh, and died to pay for our sins as the only way to heaven.  Either this is true, or the Bible and Christianity are wrong.

Jesus was God in the flesh, and died to pay for our sins as the only way to heaven

Jesus also indicated that there is one way to heaven in Matthew 7:13-14.  Jesus warned that the gate to destruction is wide, the road broad and spacious, and most people are going that way (Mt. 7:13).  Jesus said the path to eternal life is through a straight gate, along a narrow way  that few find (Mt. 7:14).

Acts 4 records the arrest and defense of Peter and John after they healed a lame man, and preached the gospel of repentance from sin and faith in Jesus, the resurrected Christ (Acts 3). In response to their examination, Peter declared:

“Be it known unto you all, and to all the people of Israel, that by the name of Jesus Christ of Nazareth, whom ye crucified, whom God raised from the dead, even by Him doth this man stand here before you whole.  This is the stone which was set at nought of you builders, which is become the head of the corner.  Neither is there salvation in any other: for there is none other name under heaven given among men, whereby we must be saved.” (Acts 4:10-12)

Salvation comes only through Jesus Christ

There is no other way to heaven

Revealed Truth uses cookies to optimize your experience on our site and enable Google Analytics. Continued use of this site indicates acceptance.OKPrivacy policy