Will Satan Get Your Child? 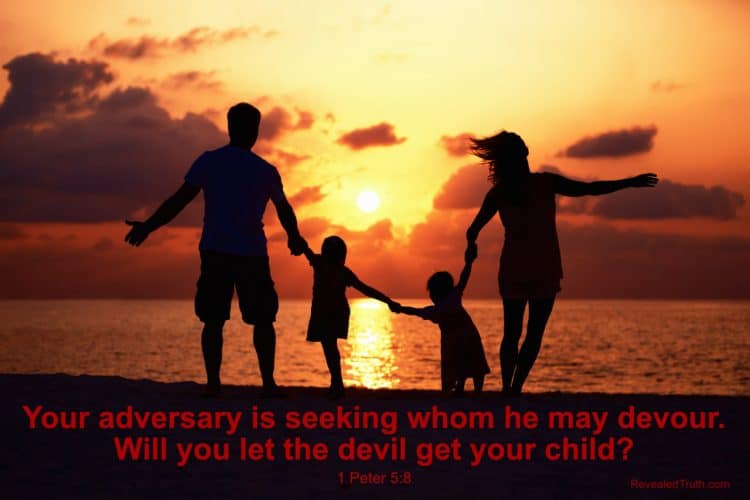 Someone Evil Wants to Steal Your Child!

He loves to murder babies, and has already killed millions. He lurks around seeking whom he may devour. But he especially likes to capture children while they are young and their hearts are tender. Will yours be next?

Will you let him?

What would you do if you knew someone wanted to steal your baby? Would you call the police? Perhaps you would arm yourself and install a security system in your house. Maybe you would hold your baby tight, afraid to put him or her down.

What will you do to stop him?

Or would that be too hard for you? Perhaps you would tell yourself that you were just being paranoid. Maybe you would say that couldn’t happen in America. After all, you are busy; you have other things to do. You cannot carry your baby around all day, every day.

The devil is walking about, seeking who he may devour (1 Pet. 5:8), and he loves to consume children.

But he rarely has to steal children, because their parents give them up quite willingly!

Millions have their babies executed before they are even born. They have no natural affection for the fruit of their womb, and cannot be bothered with the burden of raising their unwanted child. So they go to a death “doctor” to have “their problem” taken care of.

Satan snickers over the death of each baby because he hates God and loves to see His image destroyed. The devil delights in stealing souls away from God before they can even draw their first breath. This prevents the little ones from coming to Jesus and knowing God (Mt. 19:14).

The failure to snuff out all of the unborn does not bother Satan though. Because he knows he can count on most parents handing their children over to his servants for brain washing. He has been patient and sly. He slowly infiltrated school boards, the NEA, the media, the government, and even many pulpits. Now he owns nearly all of them.

Satan knows he can count on most parents handing their children over to his servants for brain washing.

All he has to do is patiently wait for parents to set their children down in one of his many traps. They may let their little ones watch adult television with them, or even just turn on “children’s programming” as a baby sitter. It does not matter, because they are all filled with ungodly philosophy, worldly ways, and impurity.

The Devil’s proudest accomplishment must be in the public school system. In less than 100 years, America went from using the Bible as a primer to teach reading and outlawing the teaching of evolution, to outlawing the Bible and teaching only evolution in schools. And it was all done in the name of “science” and the “freedom of religion!” Of course what he really accomplished was the establishment of his religion of evolution, naturalism, and humanism; ensuring freedom from God’s true religion of Biblical Christianity.

It is so easy for him now. Several generations have been raised with his brainwashing. The culture has been transformed. Most Christians now live in a state of denial, delusion, or defeat. Very few obey God’s commands regarding the raising of their children (Deut. 6:4-7; Eph. 6:4) Most people are too busy with the cares of the world, enjoying the things of the world, or chasing riches (Mk. 4:18-19; 1 Jn. 2:15-16) to worry about the spiritual welfare of their children.

Most Christians have failed to be salt and light

The devil must think his victory nearly complete. With his influence, the country established by Christians seeking the freedom to worship God is now crumbling. The nation that sends out missionaries to evangelize the world now needs to be evangelized. The “one nation under God” is now under Satan’s thumb. The government “of the people and for the people” is now spying on their people, stealing away their freedoms, and destroying their financial future. How he must laugh.

If this sounds bleak, that’s because it is. For decades, Christianity in America has been losing ground to the enemy. Unaware they were in a fight; oblivious to their plight; most Christians have failed to be salt and light. Now our enemy is drawing his noose tight. There is reason to fear for our children.

God is still on His throne!

But God is still on His throne. He can still work miracles on behalf of His children if they confess their sins, seek His face, and pray; if we turn from our worldly ways (2 Chr. 7:14) and remain steadfast in the faith.

“Be sober, be vigilant; because your adversary the devil, as a roaring lion, walketh about, seeking whom he may devour: whom resist steadfast in the faith . . .” (1 Pet. 5:8-9a)

“Submit yourselves therefore to God. Resist the devil, and he will flee from you. Draw nigh to God, and he will draw nigh to you. Cleanse your hands, ye sinners; and purify your hearts, ye double minded.” (James 4:7-8)

and Live Your Faith!

Is Jesus Ashamed of You?

Is Jesus Ashamed of You?