It Takes Only One Sin

To Prevent You From Entering In

Miriam was gone.  Moses had just buried his sister in Kadesh, in the Wilderness of Zin (Numbers 20:1).  She had placed his basket among the reeds of the Nile and had run to get his mother when Pharaoh’s daughter drew him out.  His sister had been with him through all his trials in the wilderness.  But now Miriam was gone.

Moses had been leading a rebellious, ungrateful, complaining, people through the wilderness for 40 years.  His sister had just died.  And now these people had gathered together against Aaron and him to complain because there was no water, again! (Numbers 20:2-5)  You would think after 40 years these people would have learned to trust their all-powerful, Living God to provide for them.

You would think after 40 years these people would have learned to trust their all-powerful, Living God to provide

Moses was in no mood to deal with this today.  Why couldn’t these people let him mourn his sister in peace?  Why had God brought them to a dry thirsty land with no water again?  Why did these people always blame him?  Why didn’t these people bring their problems to God in prayer instead of always complaining to him?  Why were there always so many demands on him?  Why was it always “Moses, Moses, Moses”?

God told Moses to speak to the rock, saying it would pour out water.  He was supposed to speak peaceably to the rock this time (Numbers 20:6-9).

Take the rod, and gather thou the assembly together, thou, and Aaron thy brother, and speak ye unto the rock before their eyes; and it shall give forth his water, and thou shalt bring forth to them water out of the rock: so thou shalt give the congregation and their beasts drink. (Numbers 20:8)

But Moses was not feeling peaceful today.  He was grieving the loss of his sister.  He was tired.  He was thirsty.  He was frustrated.  He was angry.

So Moses claimed credit for giving the rebels water by saying, “Must WE bring water out of this rock for you?”  Then, in his anger, Moses struck the rock instead of speaking to it.

“And Moses and Aaron gathered the congregation together before the rock, and he said unto them, Hear now, ye rebels; must we fetch you water out of this rock? And Moses lifted up his hand, and with his rod he smote the rock twice: and the water came out abundantly, and the congregation drank, and their beasts also. ” (Numbers 20:10-11) 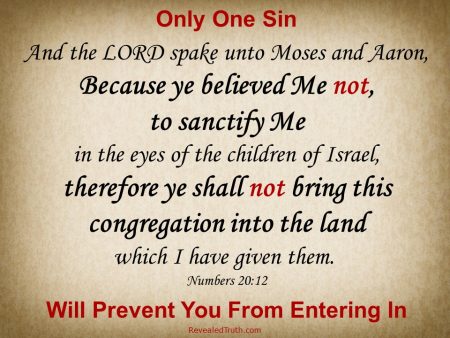 Despite Moses’ error, water poured from the rock.  God still provided abundantly for the children of Israel even though Moses had disobeyed Him.  God did not withhold His blessing from His people because of their leader’s sin.  God did hold Moses accountable though (Numbers 20:12).

Moses had always done exactly as God commanded – UNTIL NOW

Moses was devastated when God pronounced his judgment (Numbers 20:12).  He had obeyed God’s call to go to Egypt to free the Israelites from bondage.  God had worked mighty miracles through him.

God had used him to give the law to Israel and write the first five books of the Bible.  He had led God’s people through the wilderness for 40-years, enduring all their complaining and the punishment of their rebellion.  He had done everything exactly as God had commanded.

Moses was being judged by the very law he had proclaimed

For 40-years Moses had pronounced judgment without mercy on those who sinned.  Whether the sin had been idolatry, misusing God’s name, immorality, or even collecting firewood on the Sabbath, the law had condemned the disobedient for one sin.  Now Moses was being judged by the very law he had proclaimed.

God is merciful, but the law is not.  No mere human has ever been justified by keeping the law because no one has ever kept it.  All have sinned and fallen short of the law, even God’s servant Moses.  Not even Moses could keep the law.

Not even Moses could keep the law

God is gracious.  Moses was not stoned to death for his disobedience.  God allowed Moses to keep serving Him, and God kept using him to lead His people to the Promised Land.

God called Moses to lead His people out of slavery in Egypt.  The Law was given to show people their bondage to sin in the world, and their need for the shed blood of a sacrificial Passover lamb to cover for their sin.  Moses was condemned by the very law he gave.

The Promised Land can only be received by God’s grace.  So it was Joshua who led God’s people into the Promised Land.  Joshua means “Jehovah saves.”  In the New Testament, this name is “Jesus.”

And so it is today.  The Law and good works cannot take anyone to heaven.  Only faith in the finished work and shed blood of Jesus can take you there.

“For by grace are ye saved through faith; and that not of yourselves: it is the gift of God: Not of works, lest any man should boast.” Eph. 2:8-9 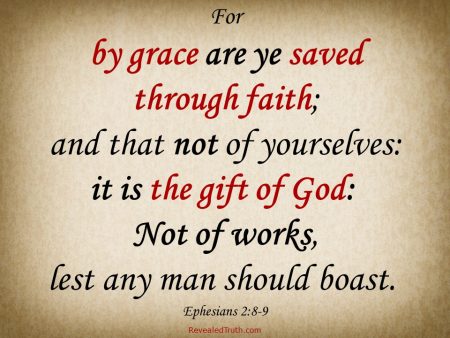 Meaning of the Wedding Feast Parable