The Sin of Sodom – Is America Guilty? 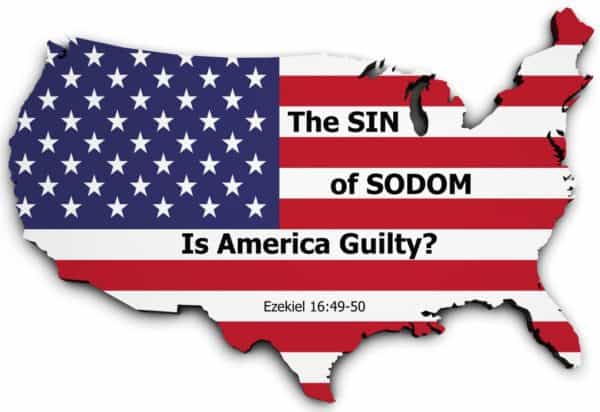 What was the Sin of Sodom?

Most people assume that the sin of Sodom and Gomorrah was homosexuality, but that is Not what the Bible says.

In Genesis 18:20, God told Abraham “the outcry against Sodom and Gomorrah is great and their sin is very grave,” but God did not say what their grave sin was. Because of the Sodomite men’s behavior the night the angels came to visit Lot, people assume Sodom’s sin was homosexuality. But the men of the city not only wanted to have sex with Lot’s visitors, they wanted to rape them.

There is More to Sodom’s Sinful Story

Genesis 13 records Abram and his nephew Lot separating because the land was not able to support their combined flocks and herds. Abram gave Lot his choice of all the land of Canaan, saying he would go the opposite way. The Bible says, “Lot lifted up his eyes, and beheld all the plain of Jordan, that it was well watered everywhere, . . . as the garden of the LORD, . . . Then Lot chose him all the plain of Jordan; . . . and pitched his tent toward Sodom” (Genesis 13:10-12).

Genesis 14 tells of Chedorlaomer and 3 kings with him defeating 5 kings, including the king of Sodom. “They took all the goods of Sodom and Gomorrah, and all their victuals, and went their way. And they took Lot, Abram’s brother’s son, who dwelt in Sodom” (Genesis 14:11-12). When Abram heard that his nephew Lot had been taken captive, “he armed his trained servants, born in his own house, three hundred and eighteen, and pursued them” (Genesis 14:14).

In addition to his many flocks and herds, Abram had 318 adult men, born in his household that were of fighting age. This would be in addition to women, children, and others who could not fight, so it likely that Abram had over 1,000 servants. This means Abram was extremely wealthy.

After defeating Chedorlaomer and the kings with him, Abram brought back all the goods and people, including Lot. Genesis 14:21 says that the king of Sodom told Abram, “Give me the persons, and take the goods to thyself.” But Abram refused saying, “I have lift up mine hand unto the LORD, the most high God, the possessor of heaven and earth, that I will not take from a thread even to a shoe latchet, and that I will not take any thing that is thine, lest thou shouldest say, I have made Abram rich” (Genesis 14:22-23).

Apparently, the plunder carried away from Sodom was so great that even someone as wealthy as Abram would have been “made rich” by it. This indicates just how exceedingly prosperous Sodom was.

The Sin of Sodom

In case you are wondering what this story has do with the Sodom’s sin, we will fast forward to the time of Ezekiel, who prophesied to the Jewish captives in Babylon. While condemning the people of Jerusalem shortly before the city was destroyed, Ezekiel explicitly stated the source of Sodom’s guilt:

“Behold, this was the iniquity of thy sister Sodom, pride, fullness of bread, and abundance of idleness was in her and in her daughters, neither did she strengthen the hand of the poor and needy. And they were haughty, and committed abomination before me: therefore I took them away.”

Here is another translation of the passage to help our understanding:

Behold, this was the guilt of your sister Sodom: she and her daughters had pride, excess of food, and prosperous ease, but did not aid the poor and needy.”

Before her destruction, Sodom was located on a lush, well-watered, fruitful plain, probably around the south-east edge of what is now the Dead Sea. Given the description in Genesis 13:10 (“that it was well watered everywhere, before the LORD destroyed Sodom and Gomorrah, even as the garden of the LORD”), the “Dead Sea” may have been alive and well at the time, a large fresh-water lake adding to the ease and prosperity of the people living in this area.

As a result, the people of Sodom lived comfortable lives with abundant food, wealth, and idle time. And as the old saying goes, “Idle hands are the Devil’s workshop.” Because of our sin nature, people with excess time and prosperity often pursue perverse pleasures.

This appears to be the case with Sodom. The Bible says, “the men of Sodom were (already) wicked and sinners before the LORD exceedingly” (Genesis 13:13), when Lot chose to live there.

The primary indictment brought against Sodom was that despite her pride and prosperity, she did not help the poor and needy

Homosexuality was not the root of Sodom’s sin; it was the fruit.

Romans 1:18-32 teaches that our sin comes from a heart of unbelief. People reject the truth of God, and turn to the worship of creation rather than honoring their creator.

This results in foolish and wicked thoughts, which lead to vile affections and a variety of unclean and evil behaviors. As this progresses, God eventually gives sinners up to the degradation of their own bodies through homosexuality.

Most people consider God’s destruction of Sodom and Gomorrah as being extremely harsh. Ironically however, most people who feel this way think killing innocent, unborn babies is OK.

Consider the backstory preceding God’s destruction of Sodom and Gomorrah

God takes no pleasure in the death of the wicked; His will is for people to repent and turn from their wicked ways so He can show mercy (Ezekiel 18:32; 33:11). God is “not willing that any should perish, but that all should come to repentance” (2 Peter 3:9).

Jonah understood God’s mercy. Jonah tried to run away instead of going to Nineveh to warn them of God’s impending judgment because he wanted God to destroy them. But that was not God’s will; God wanted the people of Nineveh to turn from their sin so He could show them mercy.

When Nineveh repented, God relented. When they turned from their wicked ways, God turned away His wrath.

Even though Jonah expected this, it displeased him. He complained to God saying, “Therefore I fled before unto Tarshish: for I knew that Thou art a gracious God, and merciful, slow to anger, and of great kindness, and repentest Thee of the evil” (Jonah 4:2).

God extended His offer of grace to Sodom and Gomorrah

While Lot’s decision to pitch his tent toward Sodom (and eventually move into the city) was questionable, it resulted in Sodom having a righteous example and witness in their midst.

Sodom and Gomorrah also received a warning judgment by God through their defeat and capture at the hands of Chedorlaomer, from which God mercifully spared them. Because righteous Lot was living with them, Abram came to their rescue. They witnessed the power of God to save and experienced His mercy.

After their rescue, the people of Sodom met Melchisidek, king of Salem, who was the priest of the most high God, possessor of heaven and earth. They witnessed the righteousness of Abram, and they saw Melchisidek pronounce God’s blessing upon him.

God gave Sodom a righteous witness, a warning, and a second chance. He gave them over ten years to repent, but instead of showing gratitude and listening to Lot, they resented him. Despite the judgment and mercy of God, the people of Sodom did not turn from their sin. If anything, they became more wicked, and their sin more grievous.

Before destroying Sodom and Gomorrah, God even gave Abraham the opportunity to intercede on their behalf (Genesis 18:20-32). Based on Abraham’s intercession, God agreed to spare Sodom IF He could find as few as 10 righteous people in it. But Genesis 19 documents that Sodom fell short of even this low bar. There were not even 10 righteous people in the city, so Sodom reaped the destruction they had sown.

Whenever I read Ezekiel 16:49-50, I fear for America, because Americans are proud, have excess food, and have an abundance of idle time. And as a nation, we have shed the blood of over 60 million innocent unborn babies instead of protecting them in their time of need.

Most of the world’s population consider Americans not only proud, but arrogant.

Food is extremely plentiful in America. Our growing waist lines testify that the average American eats excess food. Over 70% of American adults are overweight, more than a third are obese, and this weighty epidemic keeps on growing.

As a whole, Americans are also extremely prosperous and enjoy an abundance of non-working time. The average standard of living in America is now greater than any other place in the world, or any other time in recorded history. Most people only work about 40 of the 168 hours they have each week. This prosperous ease often results in self-indulgent idleness rather than productivity, which explains why Americans watch an average of 4-hours of TV per day.

Most Americans have also turned away from believing the Bible and having faith in the most high God, the creator of heaven and earth. The Bible has been banned from our public schools, along with teaching creation as a possible explanation for the origin of the universe, life, and the obvious design that surrounds us.

For decades, our children have been brainwashed into believing they are merely highly evolved animals, the accidental result of time, chance, and death. They are taught that God and the Bible are myths, when their bodies die they cease to exist. There are no absolute authorities and no reason to fear judgment in an afterlife, so anything goes.

They are robbed of any real meaning or purpose in life. Instead they are encouraged to self-indulgently pursue their own happiness through sex, drugs, music, food, TV, or anything else that floats their boat. And if their immorality results in an unwanted pregnancy, they are encouraged to kill ‘the mistake’ rather than take responsibility for their actions.

Homosexuality, the promotion of the LGBT movement, and gay marriage are not the reason for America’s guilt. They are just a sampling of the over-ripe fruit of an increasingly corrupt culture, growing from self-indulgent prosperity and the abandonment of faith in God.

“Behold, this was the iniquity of thy sister Sodom, pride, fullness of bread, and abundance of idleness . . .” (Ezekiel 13:49). Whenever I read this, I fear for America.

This post focused on the sins of Sodom and unbelievers in America, but what about you? You may be a faithful Christian living a moral life, but if you are like most Americans you have surplus time and money. How are you using them? Are you using them to help the poor and needy?

You may keep busy and feel like money is tight, but you live in a land of abundance and are probably better off than most of the world’s population. Most of our financial stress is self-imposed by using credit to buy things we do not need to raise our standard of living, but this results in becoming slaves to our debt.

What if you lowered your standards and lived below your means? What if you used your extra time and money to serve God and help the needy rather than pursuing self-indulgent entertainment?

We will all stand before God one day. If God made you justify how you spend your time and money today, what would you say? And when you finished, how would God respond? Would He say, “Well done My good and faithful servant?”

“Only one life, ’twill soon be past,

Only what’s done for Christ will last.”